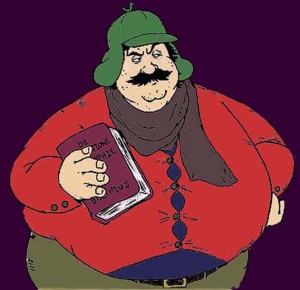 “When a true genius appears, you can know him by this sign: that all the dunces are in a confederacy against him.”

John Kennedy Toole wrote his first novel, “A Confederacy of Dunces” in the 1960s, but it was not published until 1980, long after his suicide and then only through the determined efforts of his mother.

In a nutshell, “A Confederacy of Dunces” is an episodic story of Ignatius J. Reilly; a lazy, overweight, over-educated, paranoid, flatulent, obnoxious, 30-year-old man who dresses in an eccentric and slovenly manner and who still lives with his mother in a run-down house in a seedy neighborhood of New Orleans in the early 1960s.  A self-proclaimed intellectual, he is both obsessive and delusional in the eyes of those with whom he comes in contact.

Not exactly the most appealing description is it?

And yet oddly, I found this novel to be one of the most enjoyable I have ever read.  This is particularly strange because all the characters are personally unappealing.  Yet, the tale they inhabit … the story itself … has an appeal that transcends their personal shortcomings.

A Pulitzer Prize winner, the novel has received high praise from every corner and has long since been declared a classic of American/Southern literature.  Still, the book sat on my bookshelf for a decade unopened, unappreciated,  … unread.

I’m not entirely sure why.

I had meant to read it as soon as I got it ten years ago.  Maybe I procrastinated because the reviews on Amazon gave the perception that it was one of those very polarizing books … one of those “cult classics” that are extremely popular with a lot of people, but highly disliked by a significant proportion of other readers.

At any rate, I picked it up a couple of weeks ago and finally started reading.  I was enthralled.  Yet, as I finished the last page and put the book down, I was left in a rather disturbing quandary.

Is the protagonist, Ignatius J. Reilly a true genius?

Not being a genius myself, it was hard for me to tell. Most would agree that there is an extremely fine line between genius and insanity.

Once again, not being insane myself (hopefully) … it was hard for me to tell.

Either way, he certainly exhibits the characteristics usually associated with both ends of the spectrum.

Being unable to recognize or appreciate his true genius, but being particularly sensitive to his apparent psychosis, the wide variety of “dunces” that populate this story are most assuredly in league against Ignatius.  He may be paranoid, but they are indeed out to get him.

Is he exceedingly brilliant … or is he simply out of his mind?

The reader must decide. The author provides no real concrete guidance or substantive insight.

Ignatius J. Reilly … is what he is.

True genius, or totally out of his mind, you will find yourself pulling for him, all the while knowing that you would not want to spend any significant amount of time around him.

Ignatius J. Reilly is at once, among the least likeable and yet one of the most interesting characters in all of modern literature.   His is simply unique.

“A Confederacy of Dunces” is indeed a true modern literary classic and the premature death of the author gives rise to another quandary.

If he had lived, would the career of John Kennedy Toole have been prolific, productive and as timelessly popular as, say Mark Twain?  Or would he have been another JD Salinger … paralyzed by the success of his initial effort and forever unwilling, or unable to equal or surpass it?

Who knows?  After all, a quandary is defined as a state of uncertainty.